Sounds a bit intimidating, doesn’t it?

But fear not, your day is about to get a whole lot better.

This fun and unexpectedly strong cocktail is an unusual blend of five separate alcohols with a sparing splash of cream that creates a memorable and completely delightful drink. Let me start by making this clear, never in my wildest dreams would I decide to put these five alcohols together in one cocktail.

But it works! For some reason, it works just beautifully.

Another mystery surrounding this delightful drink is its origins. ‘Jamaican’ most likely comes from the heavy rum presence and the hint of the tropics. As far as the ‘Quaalude’ part, I think the five alcohols speak for themselves, in the collective.

Let’s talk a bit about the individual spirits that make up this memorable concoction.

Kahlua is a smooth coffee flavored liqueur made from rum, corn syrup, and vanilla beans. It originated in Mexico in 1936 and is a lovely component in several of my favorite cocktails.

The recipe for the iconic and self-proclaimed original Amaretto, Disaronno, dates back to an Italian innkeeper who served as a muse for Da Vinci pupil, Bernardino Luini, as he painted a fresco in the town of Saronno, Italy in 1525. The company’s description is “…an infusion of apricot kernel oil, absolute alcohol, burnt sugar and the pure essence of seventeen selected herbs and fruits.”, and even though theirs does not have any nuts in it, whatsoever, it has a slight bitter almond flavor.

Frangelico is a hazelnut flavored liqueur produced in Canale, Italy. The legend of the spirit is that Christian monks living in Northern Italy in the 1600s produced a similar distilled drink. Its name is derived from the noted hermit monk, Fra’ Angelico, who also lived in the Piedmont region of Northern Italy in the 1700s. The current recipe uses Tonda Gentile hazelnuts found in Piedmont which are combined with coffee, cocoa, and a vanilla distillate. The distinctive bottle resembles the robes of a Franciscan friar, although the monks in Northern Italy were of the Dominican order.

Baileys Irish Cream made its debut in 1974 as an immediate hit, and has enjoyed an enthusiastic following ever since. It is a liqueur blend of Irish whiskey and cream and was produced specifically for the international market. 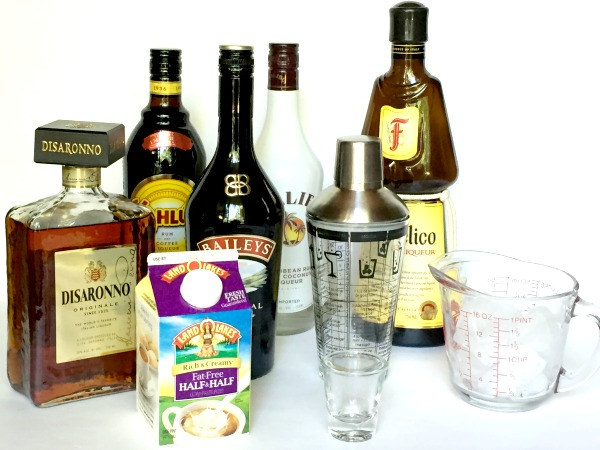 I didn’t garnish, as you can see, but the suggested decor is a slice of star fruit. To be fair, it does add that extra little something, but most of the time, particularly if I’m at home, I’m not going to bother with fussiness, no matter how lovely.

This drink is creamy, nutty, and fruity/tropical all at the same time, three flavors you don’t necessarily think will work together, but they do. And here was the exciting part, very rarely do I encounter a completely new taste combination, but this fit that bill for me!

It’s always fun to try a different drink recipe, and even more so when it’s as successful and tasty as this one. Be adventurous and try a Jamaican Quaalude tonight!

Have you tried a fun, new cocktail lately? Let me know about it in the comments.

One thought on “The Cocktail Hour: Jamaican Quaalude”